Welcome people of culture, to our top ten list of thicc anime girls. We have made a list of the thiccest anime characters built like oak barrels. Take your time, look around and check your favorites below. 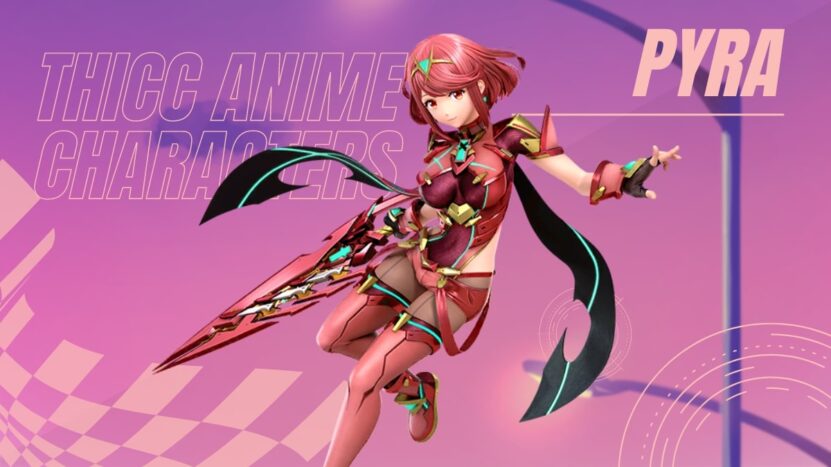 Pyra from the RPG Xenoblade Chronicles 2 is one of those “Thicker than maple syrup” characters that are very hard to forget. In the story of Xenoblade, she is one of the living weapons known as the blades, who can be summoned by the main character in the game.

In terms of appearance, she is a thicc anime girl with pink hair and pink eyes. Even though she is literally built for warfare in the story, her personality is mild-tempered and sweet, and her main goal is to establish peace between the main forces that clash in the story: the blades and the drivers.

Besides being one of the best anime girls with thicc thighs, she is also a great cook and is known for creating many awesome culinary experiences for her companions. 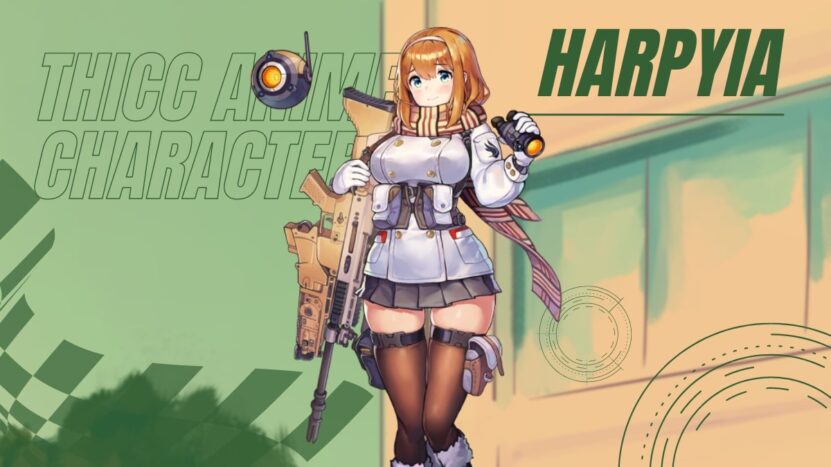 Harpyia from Last Origin is one of those thick anime girls, whose character design is a thing of beauty. She has thick thighs, long black hair and green eyes. What’s not to like!

Like the other characters in the Last Origin franchise, she is a hot thicc anime girl android fighter equipped with missiles and a machine gun.

She is known for her cleverness by her comrades and tends to outsmart her competition in a big way. A good thick anime girl to have on your side! 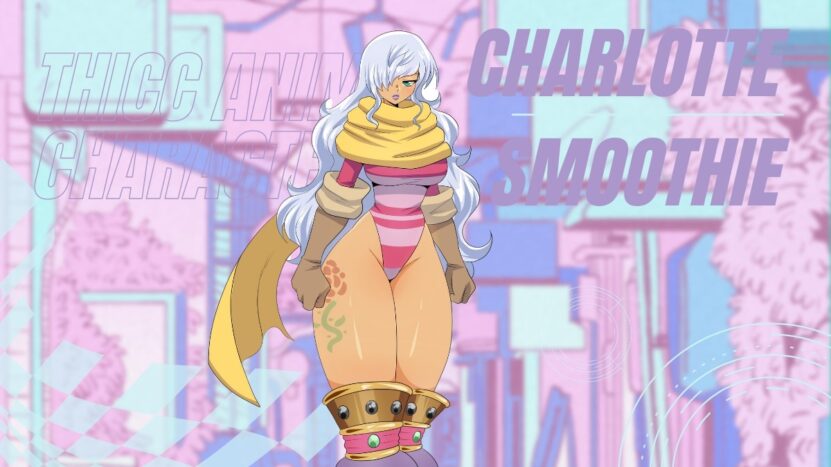 Smoothie, or otherwise known as “smoothicc” is one of the sweet commanders under the terrifying Yonko Charlotte Linlin. She is one of the strongest fighters in the One Piece series recognized by the World Government with a bounty close to a billion berries.

So far she has not showcased her abilities too much in the story, but we have seen glimpses of her devil fruit ability, the Shibo Shibo no mi, which allows her to drain the liquid from both living and material things.

She uses this ability to dehydrate and defeat her opponents. Her intimidating status among our list of sexy thicc anime characters is also increased by her immense size of over four meters, a trait inherited from her mother no doubt. 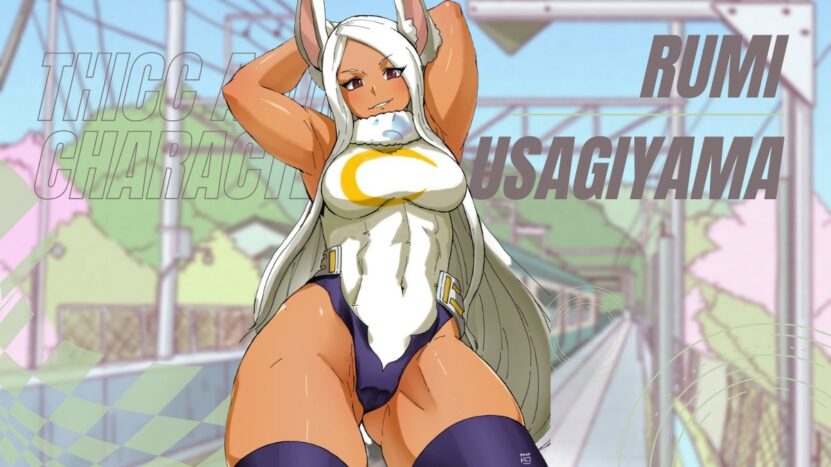 Rumi Usagiyama is a thicc anime girl from the anime series My Hero Academia. She is a pro hero known for her athletic build and combat prowess that relies mainly on physical strength and acrobatics. Don’t mess around with this spicy thicc anime chick!

Her personality is that of a tough girl, and she believes in relying on oneself rather than working as a team. She is known for her relentless nature on solo missions, as she does not back down even when overwhelmed by multiple enemies, a trait that has gotten her into trouble in the story, but no further spoilers on that. Go ahead and read the manga instead.

Nozomi Kaminashi is the thick anime girl main character from the anime series Keijo, that focuses on a strange sport geared towards admirers of the area below the midsection. She has dark, unruly hair, partially kept in a ponytail and blue eyes to match her dark blue anime swimsuit.

Nozomi Kaminashi is a hot thicc anime girl with a strange name, who’s main passion in life is the aforementioned game of Keijo and her goal is to become the best player of all time.

She is enthusiastic and cheerful unless she in a goofy mood which usually results in some naughty behavior or slapstick humor. She does not let her competitiveness in the sport of Keijo become toxic, however, as she tends to be very supportive towards her friends and rivals. Truly one of the best sexy thicc anime characters! 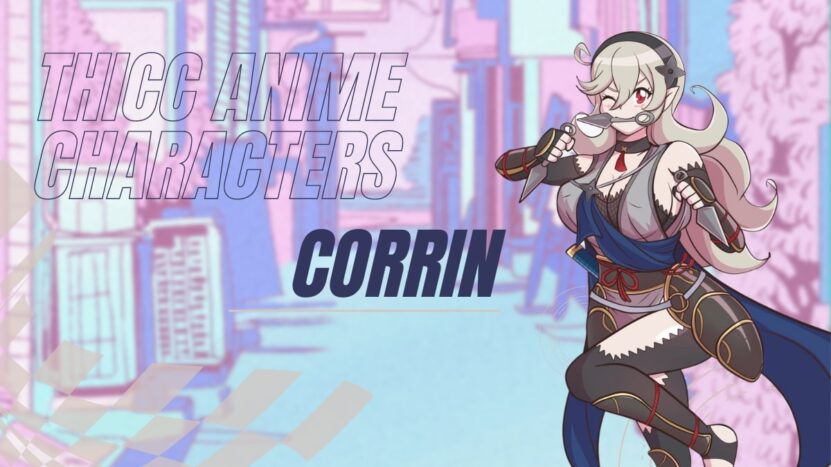 Corin is a thick anime character from the Battle Royale game Fire Emblem . It is possible to play as both the male or the female version of Corrin, but a lover of thicc anime chracters should not have any doubts about choosing the female model!

The anime girl thicc character model of Corrin is voluptuous, her hair is long and curly-blonde, and her eyes are red like rubies. She is a member of two royal families at once, having born in one and raised by the other. A fact that is apparent from her princess-like clothing style. 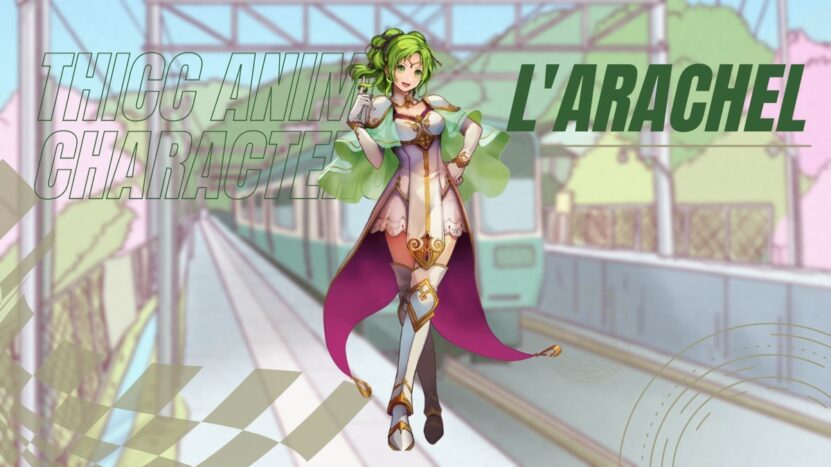 L’arachel is another hot thicc anime girl from the Fire Emblem franchise. She is a distant relative of royalty, so sort of a princess as well in terms of heritage, but definitely a princess in terms of clothing style and attractive appearance.

L’arachel has light green hair arranged in two braids, green hair and fair skin. She wears a cape and a short white dress showcasing her thicc anime thighs in all their glory.

As a princess L’arachel can be pretty demanding and focused on her own needs, one of which is her desire to become a celebrity loved by all. We can forgive all of that though, as her sexy thicc anime girl appearance makes up for her personality in spades. Surely, one of the best sexy thicc anime girls of all time.

Ryas Gremory is an attractive thicc anime girl from the High School DxD anime. She is known for her beautiful long red hair, blue eyes, fair skin and noble heritage.

A strange character quirk she has is that she sometimes wears glasses when she needs to think deeply over some topic. She has perfect eyesight, so likely that is just a gimmick to look cool or a habit that helps her think clearly.

Ryas is not just a regular beautiful thicc anime chick, however. She is very kind both towards her peers and those serving under her royal family. A trait not commonly seen in those born into royalty! 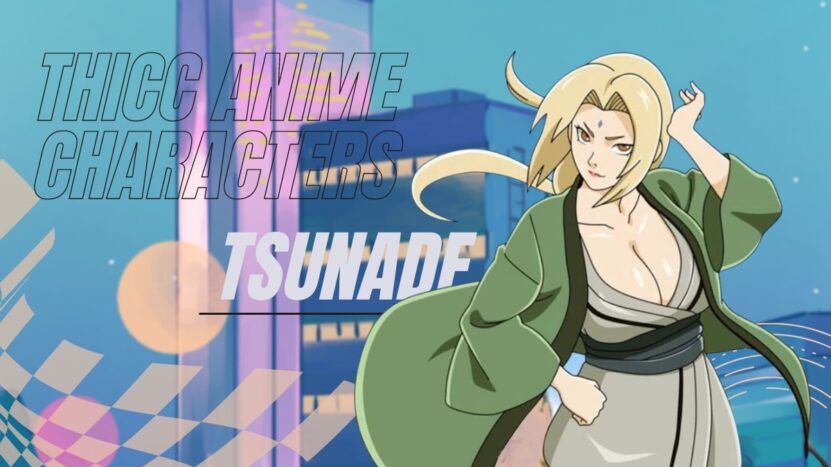 Tsunade is one of those sexy thicc anime women everyone knows and has fantasized about at least once. Admit it! In the story of Naruto, she is serving as the fifth Hokage, the leader of the Hidden Leaf village.

Taking on this job with a high level of responsibility attached to it, she carried herself well overall, albeit drinking too much for her own good, but more due to the personal tragedies she has suffered than to the nature of her job.

In terms of appearance, Tsunade has blonde, long hair worn in two pigtails, thicc anime thighs and brown eyes. When looking at her body, one cannot ignore the big anime breasts, thick hips and thighs. A enchanting thicc anime woman! 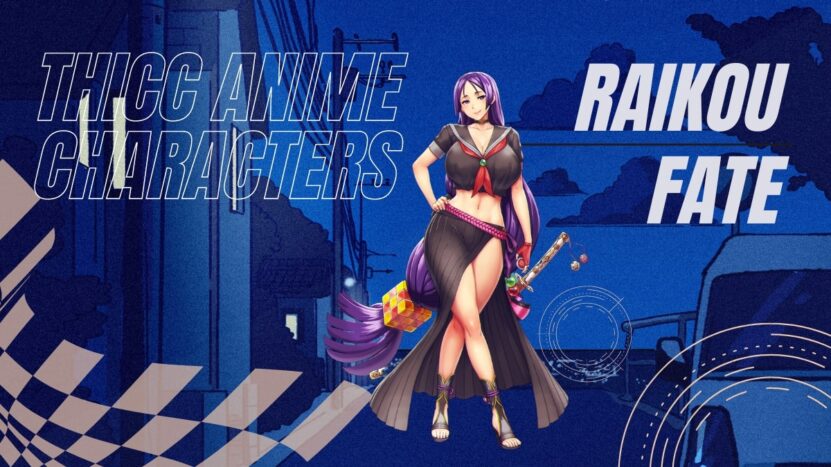 And now we reach the top candidate in our list, the gorgeous anime girl with thicc thighs, Raikou Fate. Raikou is a thick anime girl character from the video game Fate/Grand Order. One could say, the best character even from that game, and many other games. A most intriguing and well endowed woman in the leg meat department. 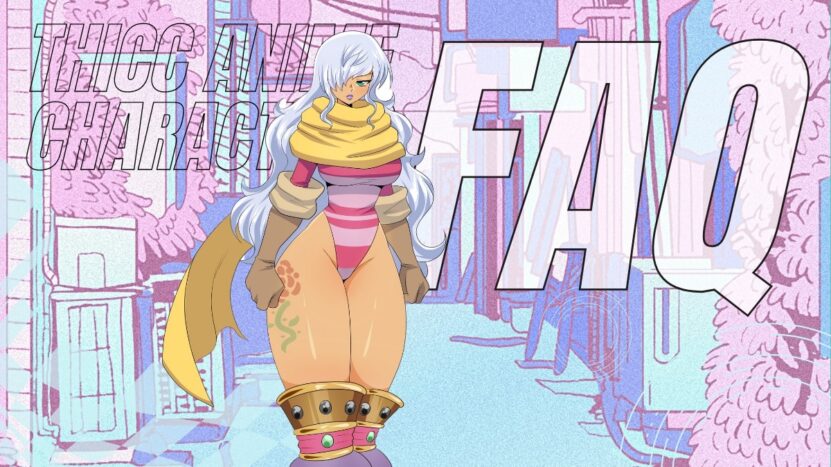 1. Who is considered to be the thicc-est anime character?

This is subjective and can vary depending on personal preference. Some popular choices include Tohru Honda from “Fruits Basket,” Boa Hancock from “One Piece,” and Rias Gremory from “High School DxD.”

2. Why do some anime characters have such large bodies?

This is a common trope in anime and manga known as “moe anthropomorphism,” where characters are given human-like traits and exaggerated physical features for cuteness or appeal.

3. Are there any male anime characters who are considered thicc?

Yes, there are several male anime characters who are considered thicc, such as Eren Yeager from “Attack on Titan” and Saitama from “One Punch Man.”

4. Are thicc characters always portrayed as attractive or desirable?

5. Are there any anime series that focus on thicc characters?

Not specifically, but there are some anime and manga series that feature thicc characters prominently, such as “Fruits Basket” and “Kimi ni Todoke.”

No, not necessarily. “Thicc” is often used to describe characters with curvy or voluptuous figures, regardless of their actual weight or body mass index.

No, there are also thicc male characters as well.

8. Are thicc characters always portrayed as confident or self-assured?

Not necessarily. Like any other character, thicc characters can have a variety of personalities and traits.

Not necessarily. While some thicc characters may be physically strong, others may not be.

10. Do thicc characters always have a positive representation in anime?

Not necessarily. Like any other character, thicc characters can be portrayed in a variety of ways and may not always have a positive representation in anime.